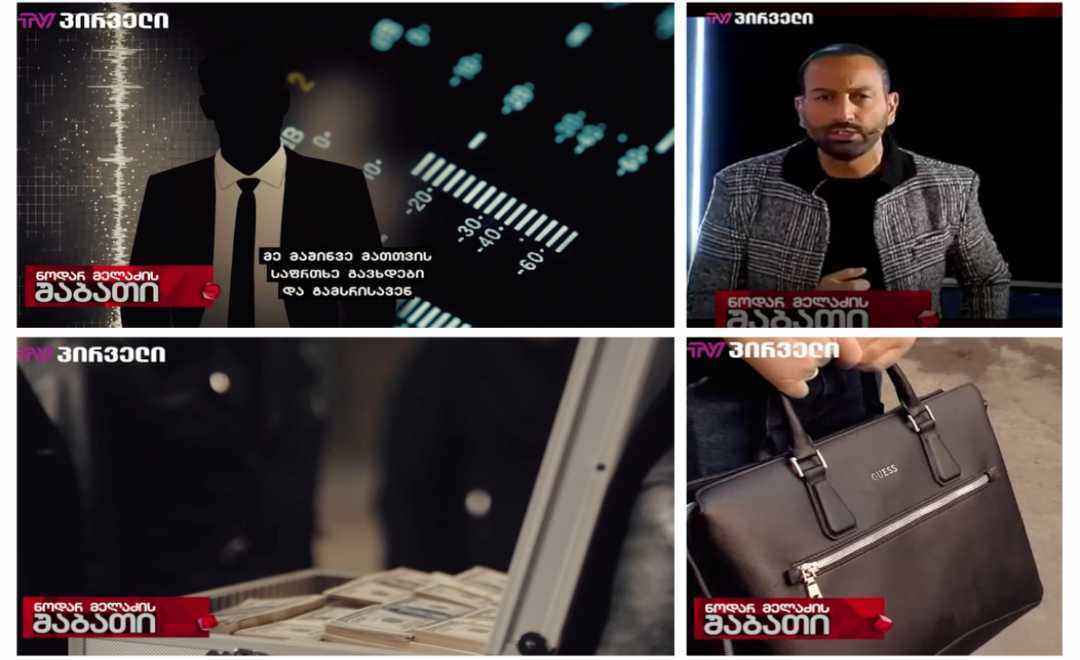 Big black money - who is Mikheil Biniashvili and how are European pensioners being robbed from Georgia? />

Big black money - who is Mikheil Biniashvili and how are European pensioners being robbed from Georgia? The investigative story, showed 2021, 27th of March on TV Pirveli broadcast in Saturday telecast “Shabatis eteri” received a great response. Probably yesterday, The Ministry of Internal Affairs, within the framework of the schemes connected to the recent issue, arrested 11 persons.

The case concerns to the fraudulent scheme, according to which, presumptively, Mikheil Biniashvili, citizen of Israel, extorts money from Europeans together with son-in-law of Kakhi Kakhishvili – depute of “Georgian Dream”.

According to the topic, one of the persons involved in the same scheme got in touch with presenter of the show by requesting a 100% guarantee of anonymity and told all the details by which they were guided.

Location, which was confided by that resource, was Shartava Street N31. As that person told, there is located the secret office, where operators are sitting, so-called call centers from where EU member states citizens are robbed. This address matches the office at which journalists of “Presa.ge” were conducting an investigation.

TV show “Shabatis Eteri”, based on obtained materials, says that with fraudulent scheme, thousand of Europeans were force to made money investment and then they disappear without leaving a trace.

As it turns out, there were several conspiratorial offices working together in Tbilisi. There are young employees who speak English, French and German fluently. All day long, these persons are calling to the citizens or European Union countries from Tbilisi, consider themselves as representatives of a brokerage company and are offering to invest money in a virtual currency business. They promise high beneficial interest rates.

So, the pensioners are fooled and the money accumulated over the years is transferred to the so-called brokerage company accounts. After a certain time, these money and all promises disappears.

Victims of fraudulent scheme, cannot find neither their money, nor the company they transferred money to.

This is what the famous forex scheme looks like.

It should be noted that this activity is prohibited in EU countries that is why Georgia is a profitable market. Here, in Georgia, it’s much cheaper hiring English-French-German speaking operators here, whatever most importantly, if you pay money, finding a patroness is not difficult either.

As was told in the show, in Georgia, behind this black market is standing son-in-low of Kakhi Kakhishvili - Nika Asanidze, it’s he, who takes $200,000 from secret office every day. Asanidze himself confirms frequent visits to the office, but although says, he is visiting friend of his father-in-low Mikheil Baniamini, but he doesn’t have any information about his business.

The resource told to “Shabatis Eteri” that this office belongs to the citizen of Israel Mikheil Baniamin. Reportedly, he was financing Kakhishvili's election campaign and that is why Kahi is protecting friends black business.

Kakhishvili himself confirms his friendship with Beniamin in the telecast itself. Also, that he has visited Mikheil’s office, but he doesn’t knows about his activities – (“Presa.ge” has prepared exclusives about Beniashvili-Kakhishvili connection in the past months).

Ultimately, 100 thousands of dollars are accumulated in the thrift box of dominant party. This is the reason, why investigative agency has not yet expressed any interest about mentioned fraudulent scheme and with its figurants. Presumably, as Ministry of Internal Affairs explains with its statement, only “little people” were arrested.